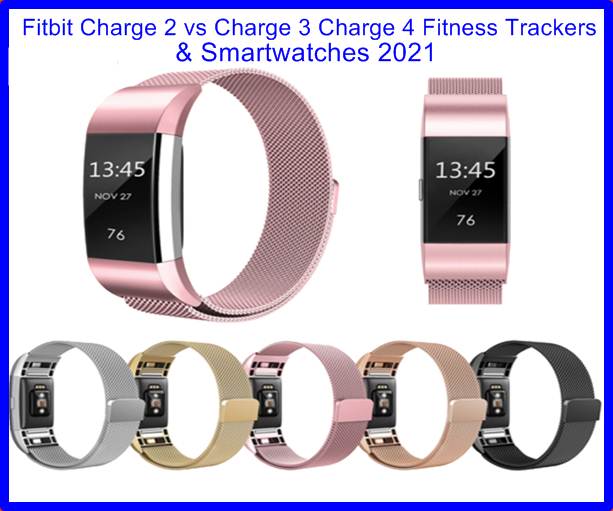 The Fitbit Charge 2 has a heart rate monitor, step and calorie tracking, sleep tracking, and multi-sport tracking, so you can actually track your workouts. It can also automatically detect exercise, so you won’t need to manually enable most modes. The Fitbit Charge 3 has all that but also adds to and improves on it.

Fitbit is one of the world’s leading fitness trackers, and for good reason. The company’s line-up of fitness tech wearables is one of the best in the business. So it should be no surprise that people are always itching to learn more about Fitbit’s latest models.When the Fitbit Charge was first introduced in 2014, it made waves in the fitness tech world. As one of the first devices to monitor steps and sleep (while also allowing for some smartphone compatibility), it was a real gamechanger for fitness junkies everywhere.

But, as the years tick by, Fitbit gives us new and updated editions to the original Charge wristband tracker. After over 7 years on the market, Fitbit’s Charge wristbands still impress, and they’re now even more functional and in-sync with your daily activity.

The overall design of the Charge changed quite a bit between the second and third generations, but not so much with the fourth. Design-wise, the Fitbit Charge 2 vs 3 saw a significant decrease in size, weight, and bulk. Overall, the Charge 3 was lighter, slimmer, and more comfortable to wear.

The Charge 3 was also the first model to use an inductive button on the side instead of a physical push button. This was a critical advancement because it allowed the Charge 3 to be fully waterproof, even while swimming.

When it comes to the Charge 4, however, the few aesthetic changes that were made were slight, to say the last. Technically, the Charge 4 is 0.01 inch shorter than its predecessor and 0.01 inch wider. However, you can swap wristbands between the two models. With that in mind, this change makes minimal practical difference unless you happen to have microscopic vision or a fondness for overwhelming precision.Weight-wise, the Charge 4 offers a slight weight savings of 3g over the Charge 3. Fitbit achieved these weight savings by swapping out the aluminum tracker housing for a plastic alternative.

The Charge also got a pretty significant display upgrade when we compare the second and third generations. From the Charge 2 to the Charge 3, we saw the introduction of a fully-featured touchscreen (that’s also 40% larger).

Plus, the Charge 3 uses Corning Gorilla Glass 3 for its display. Gorilla Glass is a super-durable compound that’s chemically treated to be up to 4x more scratch-resistant than your standard pane of glass.

This larger, fancier physical touchscreen display on the Charge 3 is also coupled with more vibrant graphics. Do keep in mind, the Charge 3 still has a black and white display, much like its predecessor.

Like the overall design, there weren’t really any changes between the Charge 3 and 4 in terms of the display. While Fitbit users hoped that the Charge 4 would have a full-color screen, the company seemed content with keeping the greyscale display on their newest model.

The features are the main reason that people buy a fitness tracker, and the Fitbit Charge is no exception. Here’s how the features have changed over the years with the Charge:

All three generations of the Charge tracker that we’re discussing here are capable of tracking your steps, total distance, calories burned, floors climbed, and active minutes. These trackers can all automatically detect exercise, which they log within the Fitbit App.

The major advancement between the Charge 3 and 4 is the introduction of “Active Zone Minutes.” This technology uses your heart rate to create “activity zones,” which are then used to judge your overall activity levels.

What truly makes “Active Zone Minutes” unique is that is can provide a more accurate analysis of your physical exertion.  For example, with vigorous exercise, you technically get credited with double the number of activity minutes. This helps account for the fact that shorter durations of energy-intense exercise can be just as valuable as longer periods of easier movement.

The Charge 2 was one of the first Fitbit trackers to offer sleep stats, but the company has come a long way with the technology in the years since. With the Charge 3, users also received the added functionality of sleep stage monitoring and sleep insights.

These capabilities got an even further upgrade in the Charge 4 with a new “smart wake” feature. With smart wake, you can set the Charge 4 to automatically wake you up at the optimal time for your overall health.

Menstrual cycle tracking was first introduced with the Charge 2 and is still available on the Fitbit app for the Charge 3 and 4. The main advancement with this technology is the fact that the Charge 3 and 4 allow users to view this information directly on the tracker’s display.

Movement reminders are standard on all three of these Charge tracker models. You can set these alerts to go off every hour during specific periods and days of the week so you can meet your fitness goals.

The Charge 2 introduced the ability to check your calls, texts, and alerts without picking up your phone. Fast forward a bit, and the Charge 3 turned things up a notch by allowing you to see additional smartphone notifications (from apps like Facebook and Whatsapp) while also making it possible to accept or reject phone calls.

The Charge 4 then upped the ante even more. With the latest Charge model, you can do everything the Charge 3 offers and control your Spotify playlist without ever picking up your phone.

GPS is perhaps the most significant feature upgrade between the Charge 3 and Charge 4, which is something that also didn’t even exist for the Charge 2. While the Charge 3 had GPS compatibility when synced with your smartphone, the Charge 4 has built-in GPS to track your workouts. This means you can track your run or bike with the Charge 4 without connecting to your phone beforehand.

Fitbit Pay is a way to make contactless payments with your Fitbit wristband tracker. It’s pretty similar in practice to Apple Pay or Google Pay, but you use your Fitbit, not your phone, to make a purchase.

This feature didn’t even exist when the Charge 2 hit the market. It’s currently available on the Charge 3 Special Edition but not the regular model, These days, it’s a standard feature on all Charge 4 trackers (which is even more beneficial considering the effects of Covid-19).

Waterproofing was perhaps one of the most significant selling points of the Charge 3 when it hit the market. Unlike the Charge 2, the third generation is completely waterproof up to 50m in depth. The Charge 4 continued this tradition and offers the same excellent waterproofing ability so you can take it swimming or on a hike in the rain (amongst other adventures).

The Charge saw a big upgrade in battery life between the second and third generations. The Charge 3 has 40% more battery life, with a maximum 7 days of use compared to the Charge 2’s meager 5 days. Meanwhile, the Charge 4 continues the week-long trend with the same great 7 days of battery power on just one charge.

Additionally, the charging cables for the 3 and 4 are the same and can be swapped, if needed. The Charge 2’s cable, however, isn’t compatible with its more recent siblings.

It’s hard to compare the price of these three fitness trackers because Fitbit lowers the cost of their older models when they introduce a new upgrade. When the Charge 2 and 3 were introduced, they both had an MSRP of $149.95.

In theory, if you consider that we’ve seen about a 9% inflation rate from 2014 to 2020, then technically consumers are getting an even better price on the Charge 4 than they did on the Charge 2 or 3. Plus, the Charge 4 is jam-packed full of features that designers didn’t even contemplate adding to the Charge 2, so this latest Fitbit model is a solid deal.

The Fitbit Charge 4: Worth The Upgrade?

If you have Charge 2 or Charge 3, you might be wondering if it’s time to upgrade. Considering the Charge 4 is lightyears ahead of the Charge 2 (in terms of overall functionality), we’d say it’s probably time to move on.

However, if you’re a proud owner of a fully-functioning Charge 3, you don’t necessarily need to buy the Charge 4 right away. Unless you’re dying to have Spotify control from your Fitbit or you really want built-in GPS, there’s not much of a difference between the Charge 3 and 4.

The verdict? The Charge 4 is fantastic, and it’s an excellent initial investment for your first fitness tracker. If you have the Charge 2, you should seriously consider upgrading it. However, if you know and love your Charge 3, we wouldn’t necessarily rush to put the Charge 4 into your online shopping cart unless your old tracker is at the end of its usable lifespan.

Are Fitbit Charge 2 and Charge 3 bands the same?

What’s the difference between a charge 3 and a charge for Fitbit?

As mentioned previously, the key difference between the Fitbit Charge 3 and Fitbit Charge 4 when it comes to fitness features is the newer device’s onboard GPS. You can still track outdoor activities with the Charge 3, but only if it’s connected to your phone via Bluetooth.

Is it worth upgrading to Fitbit Charge 3?

The Fitbit Charge 3 is quite the improvement over the Charge 2, but you should only upgrade if you’re after a more slick, lightweight design, a slightly larger display, and a few new fitness tracking features.